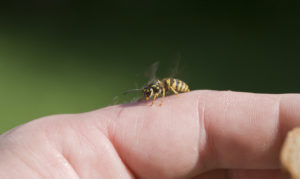 There’s just something about getting stung by a bee that strikes fear in most people, but if you’re one of the 1 to 2 million people in the United States who are allergic to bee stings, your fear is justified.  Bee sting allergies are common in the United States and can be life-threatening for people who are severely allergic.

One of the most common symptoms of a bee sting allergy is anaphylaxis or anaphylactic shock. Anaphylaxis is a severe allergic reaction that is life-threatening and demands immediate medical attention. A person who is allergic to bee stings is susceptible to anaphylactic shock when stung, which occurs when the immune system over produces allergy symptoms to combat the poison delivered by the sting. The chemicals released by the immune system create symptoms in various areas of the body, usually at the same time. Once a person has anaphylactic shock, he or she may experience a skin rash, nausea or vomiting, shock, and trouble breathing – the last of which is the most dangerous and can even be life-threatening.

An anaphylactic response to a bee sting comes on quickly for anyone who is allergic. Symptoms usually appear within 30 minutes following the sting, though some people may not notice symptoms for up to an hour and until they progress significantly. As soon as you notice symptoms, it’s critical to take action and seek medical treatment immediately.

Severe bee stings can cause serious shock and symptoms that can be life-threatening. Seek medical attention immediately if you or a person you’re with is allergic to bees and gets stung. Here are two ways bee sting allergies are typically treated.

Allergy Shots – Allergy shots have been proven to reduce the risk of anaphylactic shock. The shots gradually remove your sensitivity to the sting. They have a similar effect to that of vaccines. Allergy shots can be used for other types of allergies, as well – not just bee stings. However, they are only recommended for individuals who’ve previously experienced anaphylactic shock. If the allergic person has an autoimmune disease, allergy shots could be dangerous. Before agreeing to have allergy shots, speak with your doctor.

Emergency Adrenaline Kit – Epinephrine is the primary treatment for halting allergic reactions that are associated with bee stings. Speak with your healthcare provider about carrying an anaphylaxis emergency treatment kit/adrenaline injection kit (commonly called an EpiPen). This is an emergency-only treatment for those who have life-threatening reactions to bee stings and other allergy triggers. If this applies to you, you must carry it with you at all times. To combat the symptoms related to bee stings, use the EpiPen to inject epinephrine into your system. The kit is intended for emergencies only and is meant to help you in life or death situations.

Bee Sting and Other Allergy Treatment in Illinois

The experts at Oak Brook Allergists treat pediatric and adult patients with all types of allergies, including bee stings. If you suffer from allergies, call us at (630) 574-0460 to make an appointment today. You can also request an appointment online.