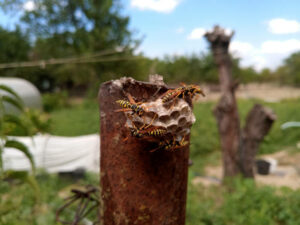 Read on to learn more about common insect allergy triggers.

Bees are one of the most feared insects because their sting can cause severe allergic reactions in some people. A bee’s stinger is actually a modified egg-laying apparatus called an ovipositor. When a bee stings, it injects venom into its victim, which contains proteins that can cause an allergic reaction.

The severity of the reaction depends on how sensitive the person is to bee venom and how much venom is injected. Most people will experience only mild swelling and pain at the site of the sting, but for those with severe allergies to bee stings, even a small amount of venom can trigger a life-threatening reaction known as anaphylaxis. People who are allergic to bee stings should carry an EpiPen with them at all times in case they are stung.

Wasps are a type of insect often considered pests because they can sting humans and animals, feed other insects to their young, and their nests can be a nuisance. Some people are allergic to wasp stings.

Wasps have two pairs of wings and an elongated body with a narrow waist. The majority of wasp species are solitary insects, but some live in colonies consisting of a few hundred wasps. Wasps feed on nectar from flowers or other sweet substances like fruit juices. They also eat other insects, which they either catch themselves or find dead.

When a wasp stings someone, it injects them with venom through its long stinger located at the end of its abdomen. This venom contains proteins that can cause an allergic reaction in some people if they’re stung multiple times or if the venom gets into their bloodstream through an open wound.

Yellow jackets are a type of wasp that looks like a bee but with yellow markings on the head and abdomen. They are most active in the summer and early fall, which is when they are most likely to sting people. Similar to wasps and bees, when they sting, they release venom that can cause an allergic reaction in some people.

Hornets are a type of wasp with reddish brown heads and gold-striped abdomens that can cause an allergic reaction in some people. Hornets are larger than most other types of wasps, and their sting is usually more painful. They also release venom that causes allergic reactions.

There are steps you can take to avoid being stung by wasps, hornets, and yellow jackets. Be aware of their nesting sites (which are often hidden in trees or bushes), wear protective clothing when working or playing outside near their nests, and avoid having sweetened drinks outdoors, as they may attract them. If you do find yourself face-to-face with one of these insects, try to remain calm – they are more likely to sting if they feel threatened.

Fire ants are another type of insect whose bite can cause allergies in humans. These ants are black and red and are found in tropical and subtropical areas. Their bites usually result in a burning sensation, followed by itching and swelling. Being aware of where fire ants are usually found, and wearing protective clothing can help you avoid being bitten by fire ants.

At Oak Brook Allergists, our allergy doctors are highly experienced in treating patients with insect allergies. If you have insect allergies, know that they are commonly associated with severe reactions, so it’s important to have a treatment plan in place, in case you get stung or bitten.

For your peace of mind and to prevent complications, consult one of our allergy doctors for the right treatment plan for you. Our allergists treat both adult and pediatric patients. To schedule an appointment, call our allergy clinic today at (630) 574-0460, or use our convenient online request form.