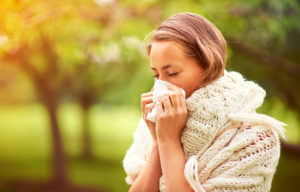 If you’re living with allergic rhinitis, you are not alone. It affects between 10 and 30 percent of the adult general population and up to 40 percent of children in the United States, making it the fifth most common chronic disease in the country.

Allergic rhinitis causes your immune system, which usually fights viruses and infections, to react to an allergen as if it were harmful, thereby producing a number of annoying symptoms, such as nasal congestion, sneezing, and sore, itchy eyes.

But what exactly causes allergic rhinitis? There are many indoor and outdoor allergens that can trigger allergic rhinitis, but the following are some of the most notorious. Let’s check them out:

Dust mites are minute bugs that belong to a group of animals called arachnids (the same class as spiders, ticks, and scorpions). They thrive in house dust and feed on dead skin cells that human beings regularly shed.

The enzyme from the fecal pellets and body fragments of dust mites can trigger powerful allergic reactions in some people.

Pollen is produced by flowering trees, grasses, plants, and weeds. Weather conditions can affect pollen levels, particularly dry, windy days that can cause pollen to circulate in the air longer and carry it greater distances and into homes.

Symptoms of allergic rhinitis are at their peak on warm, dry, and windy days when there is greater pollen distribution.

The duration of the pollen season can vary, depending on climatic changes, but typically, it starts in late March, as the trees begin to bloom and as the grass turns green. It generally ends in the autumn or with the first frost.

Tree and grass pollen tend to be more abundant between April and June, while other types of pollen, such as ragweed pollen, are at their peak between August and September.

Allergic rhinitis can also be triggered by indoor allergens such as mold, pet dander, and dust. Molds are very small fungi that tend to thrive in damp environments. They produce spores that float through the air we breathe in. The spores can trigger symptoms in people with allergic rhinitis.

As much as 67 percent of U.S. households own a pet. All animals that have fur or feathers shed microscopic skin cells (dander) the same way humans do. The proteins found in a pet’s dander, saliva, and urine can cause a reaction in people with allergies to these triggers.

Pet hair can also collect other allergens such as pollen, which can be brought into the home, contributing to symptoms in people with hay fever.

If you have allergic rhinitis, speak to our highly experienced, board-certified allergy specialists at Oak Brook Allergists. We can work with you to accurately identify what is causing your allergic reaction in order to develop the best treatment plan for you and to ultimately help you live well.

To find out more about our services, including allergy testing, call us at (630) 574-0460 today or you can request your appointment online now. We have four convenient locations at which to serve you in northeastern Illinois.